Seamanship has just finished and Piloting is scheduled to start on Monday, 11 Nov 2019 at 1900.  We will be doing Advance Piloting starting mid Jan 2020.  If interested drop me an email at bletso@twc.com

Marine Electrical Systems course will begin 22 July 2019.  This is my favorite course to teach.  The course covers DC and AC boat circuits,  proper wiring techniques, corrosion prevention, battery selection and maintenance and trouble shooting electrical problems.  Students can also crawl around each other’s boats for an ‘electrical systems audit’ which is always fun.

Navigation is scheduled to start this fall, following the MES completion.  We will also be doing the Piloting course starting in November followed by Advanced Piloting.

John Kiesel reports that we have another 4 students whole completed the Sail course.  Congratulations

This has been a less than stellar year so far as regards boating safety.  We recently had a local fatality on the river, which more than likely could have been prevented by having an anchor on board.  There were 7 fatalities on the Chesapeake around the fourth of July.

Anyone having taken the JN or N course will have used the Celestial Tools application developed by Stanley Klein.  Sad news in the Spring issue of the Ensign announced the passing of Stanley.  He was a powerhouse in the Navigation program for the Power Squadron.  He even discovered some errors in the ‘increments and adjustment table’ published in the Royal Observatory Greenwich.  He received a letter of thanks signed by Queen Elizabeth.

SAIL class starts 2 April 2019 at 1800 hrs at the Harrods Creek Fire House.  To sign up contact John Kiesel at jlkiesel@msn.com

Engine Maintenance class starts 12 Feb 2019.  Call Dale Bletso or Doug Foster if you are interested.  You may also register here

USCG Marine Safety Alert   It seems that some LED’s are causing VHF and AIS interference.

I am in the process of making our schedule for classes for the year.  Junior Navigation is already on the schedule to start 2 Oct 2018 at 1800-2000.  We already have three signed up.  If you are intereseted contact me so I can get the course materials ordered.

Check here for the full schedule and dates. We are planing on offering Marine Communications, Engine Maintenance, Marine Electrical Systems and Sail as well as our America’s Boating Course followed by Seamanship in the spring.

Inland Navigation Rules (Change)
The purpose of this bulletin is to ensure that mariners and training providers are aware of changes to the Code of Federal Regulations, 33 CFR Subchapter E – Inland Navigation Rules.
This change, advertised in the Federal Register, Volume 83, Number 16, on January 24, 2018, removed the word “danger” from rule 34:
•“Removal of the word ‘danger’ from this regulation, in addition to alignment with the 72 COLREGS, also alleviates potential ambiguity.
The signal described in Rule 34(d) is specific to a vessel that does not clearly understand the intentions or actions of another vessel, or is in doubt if sufficient action is being taken to avoid collision. It is a signal of warning as the title of Rule 34 indicates:
‘Maneuvering and warning signals. ’Vessels may use this signal even when ‘danger’ is not present.”

This is the 5 blast signal.

ATTENTION- As the boating season gets underway it seems I have to give the same advice year to year.  Trying not to bore you it is non the less advice which is important and could save your life.   WEAR YOUR LIFE JACKET when on deck,  especially at night and underway.  As an example there has been 9 fatalities in the upper Chesapeake already this year and none of them were wearing their life jackets!

ANOTHER RECORD:  Well a frenchman has done it again, a non-stop around the world record of 42 day 16 hours 40 mins.  Along the way he also broke a single day distance record as well of 851 miles in 24 hours.  That is an average speed of 30 knots!   He beat Coville‘s record set earlier this years by a full week!

12 Dec 2017
SAFETY ALERT – SPACE HEATERS AND BOATS
Well it appears it is that time of the year again, and the first marina fire has already arrived. Space heaters in boats can present a very high risk for fire. Boats move and things fall onto the heater or it falls over. Two boats were destroyed and two damaged in the Chesapeake Bay area. Marina Fire

29 Sept 2017
We completed the Marine Electrical Systems course and the results are in. Congratulations to Raymond Morgan and Thomas Binzer.

We had three members achieving Educational Proficiency this past educational year ending 30 June 2017, Faye Kugele JN, Glen Kugele AP and Dale Bletso N. This award is for those who have attained the grade of Advance Pilot and completed three electives.

Sadly we had a fatality in our local waters.  Remember that high speed at night on the river is a very high risk boating activity.  An experienced boater was killed and another seriously wounded in a boating accident just south of Captain’s Quarters when their boat hit something in the water.

Sadly, I have to say that it is definitely boating season.  I say sadly due to the un-necessary increase in boating fatalities.  A ten year old girl was electrocuted in New Jersey.  The young lady touched a metal part of a boat lift while swimming.  A totally avoidable incident.  Further a man was electrocuted shortly after they docked and plugged in to shore power.  He went into the water to save the dog and his brother.  When the boat was unplugged the brother and dog recovered.  The victim did not.

Water and electricity do not mix well when people are in the mix.  Avoid a potential problem and learn how to properly protect your loved ones.  The USPS Marine Electrical Systems covers this problem in depth.  BTW,  I will be teaching this course starting 18 July 2017.  Sign up now.  Oh, and stay out of the water in marinas.  You will never know if your neighbor’s boat or dock are wired correctly until it is too late.

5 June 2017
Know Your Boat
Three people were injured whilst fueling their boat… Now get this – they tried to fuel the boat through a fishing rod holder!!!!  It would not have taken much training to realise that that fueling ports are marked and like in cars, have a cap, cover.  The problem was then really set off when the tow company told them to disconnect the battery to avoid a spark setting it all off.  Really!?    There is almost always a spark when a battery cable is removed.    There was of course a loud boom.  This whole episode could have been avoided with an ABC course!  Learn to be a safer boater and avoid the hospital visit.  http://www.wect.com/story/35577700/three-injured-in-ocean-isle-beach-boat-explosion

1 Apr 2017
Marine Electrical Systems course has finished and the results are back. We all passed. The Sail course is now at its mid point and the instructor is off crossing the Atlantic in a windjammer so we have to wait to finish in May when he returns. Some have all the luck.

Now on a more serious note. Mother nature is ever so patient for us to let our guard down. This is a video just posted of a small sailboat which got a little to close to breaking waves and a pier. All four occupants survived, but it is safe to safe the sailboat did not.

When was the last time you checked your batteries and charging circuit?  It is fast approaching that time of the year when the water calls.  But the batteries have been sitting idle for the past few months. 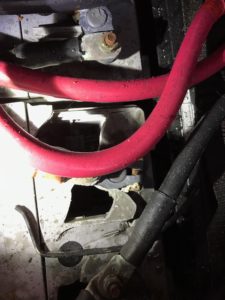 This is a picture of a battery which exploded.  This can happen if your charging circuitry is overcharging them or in the case of a heavy shorted load.  Before launch is a good time to check for chafed wiring.  On launch it is a good idea to monitor that your alternator or other charge delivery system properly charges the batteries, i.e. Bulk, absorption and float.  The last thing you want is battery acid sprayed all over the inside of the boat.  Fusing the batteries is a good safety precaution in case of a short.

SAIL Class is scheduled to start Monday 27 Feb 2017.   To register on line go to register    See you there.

Another record set –  Around the world crewed sail – Francis Joyon on his maxi trimaran sailed 26,412 miles with an average speed of 26.85 kn, completing the trip in just 40 days 23 hr 30 mins, beating the old record by 4 days! Jules Verne Trophy  For a country not known as a seafaring power, the french have been eating up the records this year.  Kind of dwarfs the little match race of the America’s Cup. (Authors opinion)

Sail Course  moved up.  Our instructor wishes to start the course in Feb.  Please contact me ASAP if you are interested.

News in the sailing world…..   Well the Vendée Globe, solo non stop un-assisted around the world sailboat race has been won by Armel Le Cleac’h aboard Banc Populaire VIII in 74 days 3 hr 35 min 46 sec.  This beat the 2013 record by 3 days 22hrs 41 mins.  Alex Thompson on Hugo Boss is still 100 nm out for 2nd place.   This has been a tight race for the two ahead of the pack.  It has been a race fraught with problems.  Huge storms, and one boat hitting a container at 17 kn.  30 % of the contingent have had to abandon the race.   BTW, the race started 6 Nov 2016.  Here is some exciting footage taken of the two leaders down under. vendee

Another feat of some import is the solo around the world speed record set by Thomas Coville in a 31 meter trimaran.  He accomplished this in 49 days 3 hrs 7 mins beating the old record by 8 days!!!   Coville

Well one thing is for certain and that is there are some things that just don’t mix like water and oil.  Below is a picture of the boat that Marlin’s pitcher and two friends thought they could mix alcohol, coke, high speed and night navigation.  Needless to say they all perished.  What a waste.  DON”T MIX YOUR BOATING WITH ALCOHOL! 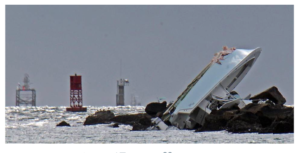